Binghamton University - While working for Stantec Architecture, Inc., formerly Burt Hill,   Linda Q. D'Orazio worked with Binghamton University from 2009 until 2012. Burt Hill was hired to masterplan the East Campus Housing, which would ultimately consist of eight residence halls and a student/collegiate center. Linda was the project architect then manager for the Collegiate Center project. She was also the designer of the last phase of residence halls, called Dickinson Community, which opened in August 2013.

LQDesignStudio, LLC has been voted by the Houzz community as a winner of the "Best of Houzz 2017" awards! Third year in a row.

LQDesignStudio, LLC is proudly licensed to practice architecture in the states of Pennsylvania, Delaware, and New Jersey.﻿

Read about the project here!﻿

Read client reviews on the Accolades page and at the LQDesignStudio Houzz page. 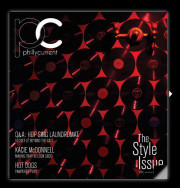 Look for the article about LQDesign Studio in the "The Style Issue" of Philly Current Magazine!﻿